Thank you for visiting Zero Waste London News.
My name is Amandine Alexandre. I am a freelance journalist, climate change activist and mother of one.

When I arrived in London in the summer of 2008 I was concerned about climate change but I wasn't doing a hell of a lot to reduce my carbon footprint. I felt powerless and reading about the planet warming up made me anxious.

Since then, I got involved in a number of local projects. In 2010 I joined my local Transition group, Transition Kensal to Kilburn. In 2013 I co-founded a local organic veg box scheme, Field to Fork Organics. I was involved in the running of the coop until the autumn of 2015. At the end of 2015 I launched Zero Waste London to share my journey towards zero waste in the hope of inspiring other people to follow suit.

It's been more than three years almost 5 years since I've started this blog. It's now September 2020 and I'm more concerned that I've ever been about climate change. The situation is terrifying. Yet, some many people seem to be completely oblivious of the catastrophic scale of the change the planet is experiencing.

I wish that climate change were a nightmare that we will wake up from at some point in the future. It's not. Climate change will make the Earth uninhabitable in the near future if we just carry on living the way we do in western countries.

We need to enter a climate emergency mode, as advocated by psychotherapist and Climate Mobilization founder Margaret Klein Salomon (@ClimatePsych on Twitter).

I'm only just coming to terms with the implications of entering this emergency mode. I'm trying to work out what it means for my job, my day-to-day life and my family life. I already know one thing: talking about the sheer magnitude of climate change and trying to get people around me to adopt this emergency mode already feels better than keeping quiet about the planet warming up at an incredible rate.

In February 2019 I created a WhatsApp group called NW London free items to reduce consumerism in my part of London. It's very popular and I went on to create a group only dedicated to selling, buying and donating baby and toddler items in Harlesden and Kensal Green. If you live in the area and you're interested in joining one of the groups, please send me an email with your phone number (amandine.london@gmail.com).

Reducing waste in general - food waste but also textile waste and energy waste, all the natural resources waste - is absolutely necessary as part of the climate change fight.
Welcome on board the waste reduction revolution.✊ 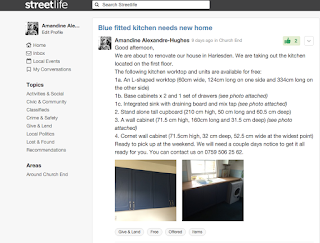 We did it. We donated our old kitchen. It won't end up in a landfill. It is a massive relief. This fitted kitchen was installed on the first floor of our house - currently split into two flats. It was old. It was blue. Apart from that, there was nothing fundamentally wrong with it. The fact is that te had to get rid of it to turn the flats back into one property. We didn't need the kitchen. It didn't mean that it was not needed somewhere else.  A match made on Streetlife So, ten days ago, fully determined to reduce my waste, I put an advert on my local Streetlife page and my local Freegle group page to find a new home for it. A few days passed without anyone contacting me. I started feeling quite pessimistic about our chances to get rid of it in a sustainable way - and without having to pay for its disposal (more on that later).  The advert I posted on Streetlife for free On Friday, Nadia contacted me. She was very eager to replace the kitchen in her re 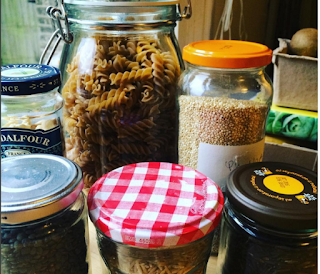 Sometimes, I feel like the more efforts I make to reduce the amount of waste I produce, the more discouraged I get. Every non-recyclable or non-compostable piece of waste I throw away weighs a lot on my conscience. As April is about to begin, I feel that I need to remind myself of the positive steps I've taken since the beginning of the year. Things are moving in the right direction. : )) 1. Bulk food shopping is the way to go! I visited Whole Foods Market in Richmond in January where I was able to buy a number of staples in bulk using recycled paper bags supplied by the store. More recently, I went to the Dry Goods Store in Maida Vale to stock up on quinoa, lentils, pasta, rice etc. I am planning to go back to Maida Vale soon. Previously, I had ordered staples online from a cooperative. It's not a bad option if there isn't any bulk shop near you.   Staples from the Dry Goods Store in Maida Vale.  2. Bulk bags at the ready I've taken some machin