I am on a mission to reduce the electricity consumption of our household by at least 10% by October of next year.

Our current consumption is reasonable judging by the average UK stats. Between September 2019 and October of this year, we used 3113 kWh. That is below the average consumption for a house in outer London, according to official 2018 stats. Considering that my husband has been working from home during half of this period and that I also work from home, I think this is pretty good.

However, because we are with Ecotricity, one of the handful of truly green energy providers in the UK, our electricity bill is higher than average (£727 against £679).

To reduce our bill, we could move to another energy provider. It’s not a solution that I favour as I think getting our energy from a 100% green energy provider is one of the most important things we can do to support a greener economy and fight climate change. Also, collectively, we need to cut our energy consumption massively in order to reduce greenhouse emissions and avoid the worst climate change scenarios.

So, to save money and cut our carbon footprint all in one go, I’ve pledged to reduce our household electricity consumption by 10% over the next 11 months, or 311kWh - and our gas consumption by 20% (more on that in an upcoming article) - and 10% the year following (i.e. 280kWh).

How do I achieve my goal? By implementing the 10 tips below that I’ve come up with after doing some extensive research.

If you find those tips useful, consider buying me a Ko-fi here. 🙏

Don’t use lighting during the day. Roll up the blinds, open the curtains etc. : let natural light flood into your house. Switch off the lights in the morning as soon as possible.

In the evening, turn the lights off when you leave a room. Make it a house rule and instore a fine. Every time a member of your household leaves the lights on when they are not in a room, ask them to put £1 in the light jar.

Also, limit the number of lights you have in your house - which doesn’t mean you have to live in the dark, obviously. According to a survey carried out by the UK Department of Energy between 2010 and 2011, the more lights there are in a house, the more lighting is used. It does play a role in the overall electricity consumption.

According to the Energy Saving Trust, switching off the lights could enable one person to save £15 per year on average.

2.Make sure that all your light bulbs are LEDs, including your outside lights if you have any. 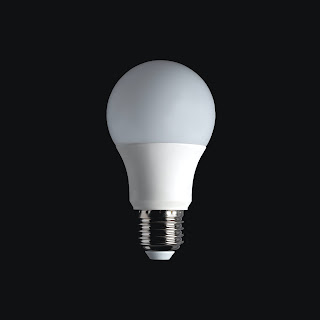 Maybe you assume that all lights in the house are Light-Emitting Diodes because we are in 2020 or because you relied on someone else to make sure that it was the case (in my case, my husband). Don’t assume anything. Check your bulbs. Perfect lockdown activity!

“If the average UK household replaced all of their bulbs with LEDs, it would cost about £100 and save about £35 a year on bills”, according to the Energy Saving Trust.

3. Switch off appliances when you don’t use them (and power points as well!) 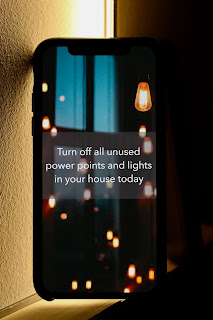 Don’t let your desktop computer (especially!), printer and any device that can be turned off on standby.

A very in-depth survey done by several government departments in England in 2010-2011 - Powering the Nation - has shown that domestic background standby consumption was much higher than previously estimated - between £50 and £86 a year.

4.Wash your clothes on 30 degrees and resist the lure of the tumble dryer. 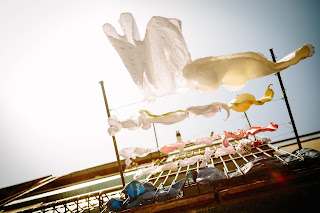 The temptation to use the tumble dryer that is the hardest part, I find, especially at this time of the year, although some households use it all year round (!).

“Some households continue to use tumble dryers through the whole year, even in summer. Making more use of outdoor clothes lines could save up to 1 kWh/day/household April to October.”, according to a study published by the UK Department of Energy.

The crucial thing is to make it as practical as possible for you to dry your clothes in another way. Buy a compact and sturdy airer you can keep by the side of your washing machine (I’ve bought a Minky) or invest in a pulley airer if you have enough space in your house for one of those. You could also have a retractable washing line in your bathroom for example. We had one in our previous flat.

You may be able to recoup the money invested 12 months later, depending on how much you cut your tumble-dryer use and its energy efficiency.  According to the same study quoted above, in 2010-2011, the annual average consumption for tumble dryers in England was 394kWh and cost £57. 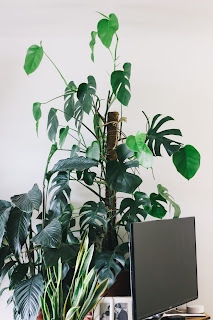 If you are considering replacing your fridge - the biggest source of energy consumption of all the appliances in your house - do not go for a big fridge - especially not an American one. Same thing for TVs.

“Televisions are getting gradually larger over time, and using more energy as a result. Screen size is undermining the efficiency gains achieved in new TVs. If a household that has yet to buy a new TV today bought a TV the same size as they had 10 years ago instead of today’s mean size, they could save 50 W, or about 47% of the energy to run their TV when it is on.”, Department of Energy

6. Buy the best energy rated appliances you can afford and look after them. 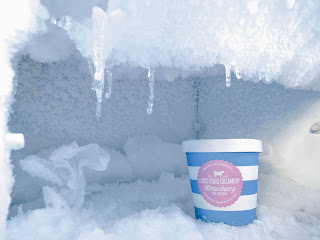 An A++ fridge, freezer or fridge-freezer is a third more efficient than the average of all the other less efficient appliances. But remember my 5th piece of advice - don’t buy a big fridge even if it’s a very efficient one.

Also, fridges and freezers are less efficient when they need defrosting. Defrost your fridge and freezer regularly (aarrgh).

7. Don’t buy electronic and electric gadgets - at least, not too many. 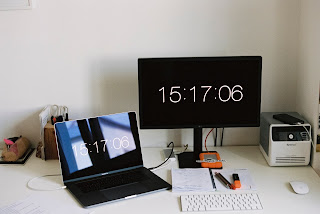 OK. I am aware that what I consider as a gadget may not be a gadget for you. Also, I understand that we all need some hobbies. Nevertheless, I was really shocked to find out the amount of electricity used to power up entertainment devices and other gizmos.

According to Powering the Nation 2, a report summing up the findings of the same study mentioned previously, English households spent 553kWh a year or £80 on powering entertainment devices (as in game consoles)!

If you add to that electricity spent on small kitchen appliances such as breadmakers, coffee machines, fryers and yogurt makers, for example, it totaled almost £100 per household. That doesn’t take into account powering fitbits and other electronic devices that regularly need charging. OMG.

8. Monitor your electricity use with a smart meter.

Smart meters enable you to know how much electricity (and gas) your household is being used every day and even every hour in your house. They should help you to get a better grip on your energy consumption.

Smart meters are being installed by energy suppliers. Every home in England, Scotland and Wales will be offered the opportunity to upgrade to a smart meter by their energy supplier before the end of the rollout. These will replace the traditional meters in your home. 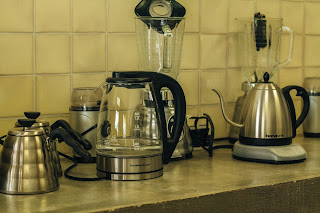 In 2013, the Energy Saving Trust did a survey and found that “Three-quarters of British households overfill their kettles, wasting a total of £68m each year”. According to the same organisation, you could save £6 per year on your electricity bill just by only heating up the right amount of water each time.

Is a kettle the most efficient way to heat up water using electricity? Last year, our kettle broke down and we decided not to replace it because we realised that heating up water in a pan (with a lead on) on our electric hob was just as quick. Just a thought.

(If you have a gas hob, stick to your kettle. In How bad are bananas?, Mike Berners Lee explains that using the kettle is responsible for less CO2 emissions than using a kettle on a gas hob.) 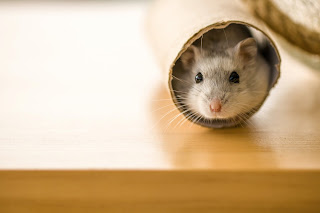 It’s probably the easiest to implement of all the advice! 😄

If anyone in your household suggests that it would be nice to get an aquarium, let them know that on average (10 years ago, but you don’t need to tell them) aquariums cost £40 in electricity per year and suggest to get a hamster instead. At least, they can power their own wheel.

If you've enjoyed this article and that you've learned something you can implement at home, please consider buying me a Ko-fi here. Thank you!

5 tips to reduce your plastic use (even further)

You've stopped using plastic bags. You take a stainless water bottle with you when you go out. Maybe you've invested in a reusable coffee cup and you even use fabric bags to do your food shopping. Below are 5 tips to go even further in decreasing your plastic use and your waste in general.  1. Use a spray bottle for washing-up liquid Right. You won't save tonnes of plastic or money by doing this. But I mention it anyway because it's such an easy step to take that I would feel guilty not sharing it with you.  Pour 1/4 or 1/5 of the content of a washing-up liquid bottle in a spray bottle (it depends on how concentrated your washing up liquid is, I guess). Fill in with water. Shake. Spray the diluted liquid onto your dirty dishes.  The chances are that you already have an empty spray bottle in your house. If you do need to buy one, it will cost you about £1.  Go the extra mile: make your own cleaning products using white vinegar/bicarbonate of soda/essenti 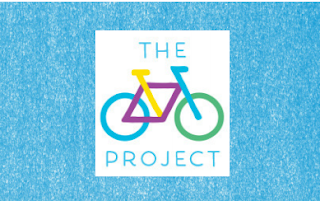 "A bike can transform a refugee’s life"

Jon Machen is the founder and director of The Bike Project, a charity that provides bikes to refugees in London and Birmingham. I interviewed him for the 2nd issue of the Zero Waste London Newsletter that went out to subscribers on 28th October 2019. For how long has the Bike project been going on and how many bikes have been given to refugees so far?  The Bike Project was set up in 2013 and since then has donated more than 5,500 to refugees and asylum seekers. Are the bikes all refurbished ones?  Yes, all the bikes that we give to refugees and asylum seekers have been kindly donated to us by members of the public. We have a team of expert mechanics who then carefully access each bike, refurbishing those that we believe can be made road-worthy. How much of a difference does having a bike make to a refugee’s life?  Being given a bike can have a transformative effect on a refugee’s life. A bike can help reduce the cost of travel around London ensuring that refugees