January 12, 2016
We did it. We donated our old kitchen. It won't end up in a landfill. It is a massive relief.
This fitted kitchen was installed on the first floor of our house - currently split into two flats. It was old. It was blue. Apart from that, there was nothing fundamentally wrong with it. The fact is that te had to get rid of it to turn the flats back into one property. We didn't need the kitchen. It didn't mean that it was not needed somewhere else.

A match made on Streetlife
So, ten days ago, fully determined to reduce my waste, I put an advert on my local Streetlife page and my local Freegle group page to find a new home for it. A few days passed without anyone contacting me. I started feeling quite pessimistic about our chances to get rid of it in a sustainable way - and without having to pay for its disposal (more on that later).

Is it good enough?
When I told my husband about the fact that I had found a family for our kitchen, he wasn't that relieved. "Have you told them that it's old? And blue?" Although Ben had initially agreed that the kitchen was good enough to be donated to someone, he was feeling guilty. To the point that I was almost unsure myself whether we were doing the right thing. Were we trying to dump an horrible, useless sets of cabinets onto an unknown couple? I quickly regained my judgement. No, we were not being mean. We were being generous and practical.

Yesterday, Nadia's husband came with a friend of his. In one hour, they took the kitchen down and loaded it onto a van. Later in the afternoon, Nadia sent me a lovely email thanking us for the kitchen. She promised to send me a photo of the kitchen once it's installed.

Donating our kitchen saved us some money
In all honesty, Nadia and her husband did us a favour by taking the kitchen cabinets, worktop and sink off our hands. Donating this kitchen saved us a few hundreds pounds. Last October, when we dismantled our big garden shed, we had to rent a van. We also had to pay a £95 disposal charge at our local recycling centre. Gardens sheds, demolition materials, bathrooms units and kitchen units are some of the waste that the Abbey Road centre recycles for a charge. It certainly makes you thing harder about how you can keep your waste to a minimum.

After the very positive experience with donating my kitchen, I now feel more motivated than ever to find a home for the items that we will end up getting rid of as a result of our house renovation project. I'll keep you updated.

P.S: as promised, Nadia sent me photos of the installed kitchen. It looks nice! 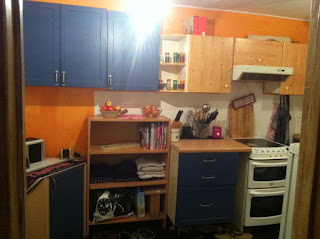 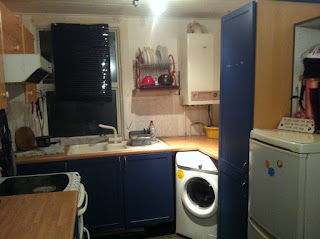 I am on a mission to reduce the electricity consumption of our household by at least 10% by October of next year.  Our current consumption is reasonable judging by the average UK stats. Between September 2019 and October of this year, we used 3113 kWh. That is below the average consumption for a house in outer London, according to official 2018 stats. Considering that my husband has been working from home during half of this period and that I also work from home, I think this is pretty good.  However, because we are with Ecotricity, one of the handful of truly green energy providers in the UK , our electricity bill is higher than average (£727 against £679).  To reduce our bill, we could move to another energy provider. It’s not a solution that I favour as I think getting our energy from a 100% green energy provider is one of the most important things we can do to support a greener economy and fight climate change. Also, collectively, we need to cut our energy consumption massively in

How to dispose of your junk without creating a mess

If the idea of getting rid of your unused items is a source of anxiety, the advice below is for you.  Across the UK, since the end of the spring lockdown, many recycling centres only allow people who have booked a slot, sometimes weeks in advance.   Covid-19 or not, disposing of unwanted items responsibly is a conundrum, first and foremost, because the vast majority of us in so-called ‘developed countries’ over-consume. Also, most industries do not design products for a circular economy — items that can be repaired and upcycled instead of binned.  Photo by  Zibik  available on Unsplash As a result some of us suffers from “landfill panic” — a term coined by broadcaster Adrian Chiles in a recent column for the Guardian that resonated with me and quite a few other people judging by the number of comments left by readers. Hence, the pile of stuff that has been collecting dust on my desk for months, if not years such as broken iPhone charging cables.  The reuse and recycle Monopoly Think a